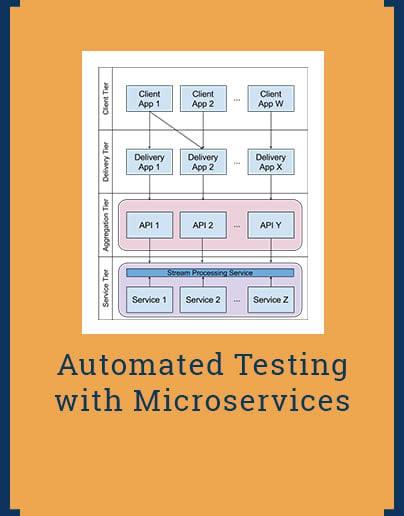 More than ever, businesses need to adapt to how and where their customers are wanting to engage. Growth, revenue, and engagement via traditional (web) channels are being exhausted. New digital mediums need to be stood up quickly when significant market segments are identified. Microservice architecture is a response to that demand which aggregates the core ‘business capabilities’ to a set of services that any new digital experience can quickly leverage.

While servicing the desire to stand up new digital mediums quickly, microservice architectures also expose unique challenges for responsible, quality-oriented, and reliable software development and demand additional considerations for testing methodologies. Two top considerations that all testing methodologies must address are “what to test” and “when to test”. The Test Pyramid provides a blueprint for addressing both concerns.

Let’s explore how the Test Pyramid can be applied to a microservice architecture, and how to overcome unique challenges presented in that application.

To achieve a greater understanding of how the Test Pyramid layers are applied, we will introduce a 4-tier microservice architecture seen in Figure 1, below. A microservice architecture is comprised of Components. It is important we define the term “Component” as it applies to the different flavors of tests. A software Component is a unit of software that is independently replaceable and upgradeable.

The example 4-tier architecture is comprised of the following tiers:

Unit tests should be prolific through all tiers and Components of the microservice architecture. Every deployed Component in any tier of the architecture should have Unit Tests defined within that Component’s code repository.

A challenge that can arise with Unit Tests is that various Components likely to be implemented in different languages. Languages have standard and third-party unit test frameworks, making switching between various Component code repositories difficult. The issue is compounded as developers attempt to reliably run and update unit tests. To overcome this challenge, select unit test frameworks for each Component’s language that correspond across languages. By choosing test frameworks that share similar testing philosophies and testing structures, a developer able to switch between Component code bases and Unit Test suites with greater ease.

In the example, 4-tier microservice architecture example from Figure 1, each Service, API, Delivery App, and Client App is considered a Component. Component tests should be implemented within each Component’s code repository where all dependency Components are mocked. For example, Service Tier Components rely on messages placed on the bus by other Services. Therefore the Component Tests for a specific Service should rely on mock messages rather than instantiating any other Services.

A challenge that can arise with Component Tests is ensuring interfacing Components fulfill the same interface contract for testing. This challenge is especially evident when the development of different Components is being handled by disparate developers or teams. To overcome this challenge, it is helpful to implement a schema-based interface that both Components incorporate into their interface implementation. Schemas may be defined in a code repository separate from all Components, providing a single source of truth for cross-Component interactions.

Once the Components that comprise the example 4-tier microservice architecture are deployed to an environment, communication between components may fail due to various configuration and environment considerations. The Interface Test layer test suite is comprised of lightweight testing mechanisms for ensuring Components are communicating.

In the 4-tier microservice architecture example, end to end data transfer occurs at the Delivery Tier layer. A single System Test layer test suite should include harnesses for producing sessions that can properly connect to Delivery Applications. Session considerations may include cookie tracking, request headers, etc that are specific to various Delivery Apps. It is worth noting that depending on the deployment configuration of the Aggregation Tier, it is conceivable that System Test layer tests could execute against the Aggregation Tier directly.

Like Interface Tests, a challenge that can arise with System Tests is ensuring that Component configuration is similar between environments. This challenge is overcome by using an operating-system-level virtualization strategy in order to stand up and link Component processes in a consistent way independent of environment. In addition, System Test suites need to be configurable to run against local or deployed environments.

As we have seen, the Test Pyramid provides a framework for defining the flavors of tests required for Microservice Testing. While microservice architectures present unique challenges for testing, these challenges are not insurmountable as summarized in the below table.

As discussed, a testing framework gives developers high confidence that their code does not introduce unintended bugs. Combining this with monitoring tools and automated CI/CD delivery pipeline allows for bugs to be uncovered quickly. Where bugs are uncovered, new tests are added so that the testing framework is strengthened. The result is a test platform that assists developers in their goals of quality software and fast, iterative development.